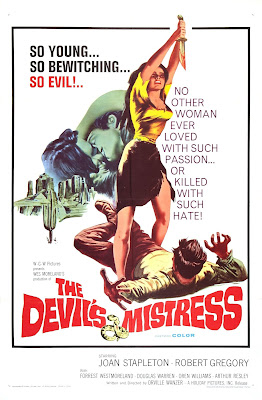 Four men riding through Apache territory encounter remote cabin. Despite one of their number suggesting they should leave it alone, they approach it. There they find a religious man and woman.  After dinner they sense something is wrong and they go to leave but then end up killing the man and taking the woman along with them as a plaything. They soon find out they should have just left the couple in peace.

Running just over an hour this is exactly the sort of film that would have played in drive in across the American South in the 1960's. Low budget  and aimed at a very particular audience this is a film that was designed to play a role, which is give audiences an excuse to go to the drive in.  It is very much of a type and if you've ever wanted to see a genuine "drive in" movie, aka one designed to be played there, this is for you.

While not remotely a great film, or perhaps even a good one, DEVIL'S MISTRESS is an entertaining one. Not constrained by the requirements of a film designed for mass consumption the film takes some dark turns including implied rape and some nasty deaths. If you have any hope of liking the film you have to be willing to take this film on it's own terms.

Highly recommended for those who love weird genre mashups, all horror films no matter where they lurk and those who want to go off the road cinematially or just visit a time gone by.
Posted by Steve Kopian at August 01, 2019