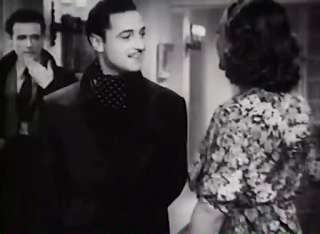 When a convicted jewel thief gets out of prison he heads to the home of the man who paid him to steal the jewel. Not happy to see him, and not having the money to pay him (he didn't yet sell the titled jewel), the rich man puts the convict on his staff as a butler until he can sell it. Things get complicated when guests arrive for a weekend house party.

Short British mystery it runs a fast 50 minutes is a breezy entertainment. This is everything you would expect from a mystery film of the period  and it does it to near perfection. While the talky middle isn't up to the set up and the conclusion, it entertains enough to make it worth your time.
Posted by Steve Kopian at August 25, 2019