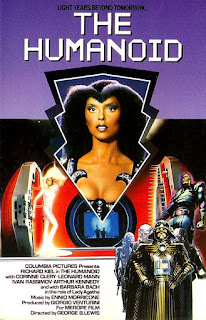 Screamingly funny and twice as awful Star Wars influenced Italian science fiction film about an evil overlord who looks like Darth Vader but with straps across his face who makes a deal with an evil scientist to help him make an army of invincible humanoids, the first of which is a top billed Richard Kiel

Where to begin? Good looking film (the Vader bit aside) is a complete mess as we have a gentle giant, evil scientist, the force stolen ship designs and some of the most hysterical dialog you've ever heard. You'll be talking to the screen pretty much from the get go as logic goes out the window and stupidity reigns.

I kept wishing that the Riff Trax guys were watching it with me or else some friends aren't afraid to be vocal about the messes they watch.

One of the worst films you'll see all year- not recommended unless you need laughs and are watching this with really witty friends who know how to pick on bad movies.
Posted by Steve Kopian at August 27, 2019

Email ThisBlogThis!Share to TwitterShare to FacebookShare to Pinterest
Labels: mst3k material, not worth the effort, science fiction