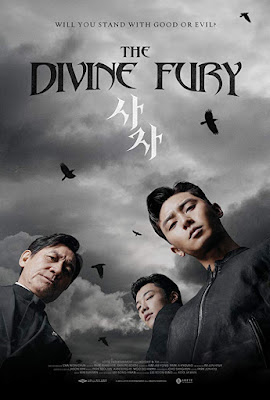 A mix of horror, religion and martial arts, Divine Fury is an action packed film that flies through its 130 minutes at breakneck speed. It’s a film that ends with a notice that there may be a sequel in the offing and frankly I’m really okay with that. I mention that up front because the film is a great deal of fun and if you’re like me you’ll want the fun to keep going.

The film begins when a young boy’s policeman father is killed by a demon possessed young man. The boy blames god for the death and kind of turns away from god. Growing up to be an MMA fighter the boy finds that he is hearing voices telling him to take revenge on god for his father’s death. Turning to a priest for help he ends up in the middle of a supernatural battle for the world.

Weird mix of genre’s works best as a balls to the wall martial arts thriller thanks to a steady series of action set pieces. While the horror and supernatural elements provide some moments and some really cool visuals the scares never fully materialize since they are kicked aside by a steady stream of body blows. The action simply is great and when the film was done it was what I remembered.

Well that isn’t wholly true. I was intrigued by the religious threads running through the film, especially the discussions of God’s guilt in the bad things that happen. It’s a heady mix of ideas with the action that add strange weight to the proceedings that is completely unexpected. I never thought a film about an MMA fighter in Korea fighting demons would have me pondering the nature of God, but Divine Fury had me thinking.

Please forgive me I don’t know what to say beyond I had a blast watching Divine Fury. Its probably not high art but it is a blast and a half. This is exactly the sort of film I love to watch on a raining afternoon with a big bowl of popcorn.

Divine Fury played last night at Fantasia in Montreal. It next hits theaters in the US on August 16th
Posted by Steve Kopian at August 02, 2019