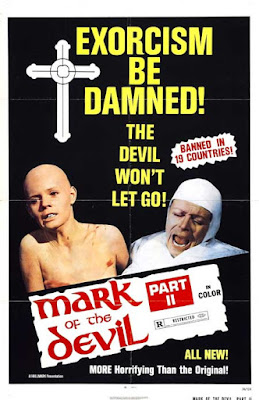 Legendary and infamous film played off and on in special engagements through the 1970's and 80's.  The promise of a film banned in 19 countries and an endless supply of cruelty made people rush to see it.

The film's story is largely the story of a witch finder (played by Reggie Nalder) tormenting the population of a village more or less for the hell of it. While he claims to be searching for the devil he is really simply tormenting everyone to get his kicks. He collides with a noble family as all the good Christians try to stay out of his way.

More a collection of torments than a straight narrative this is a kind of endurance test. How much can you take before breaking? While much less graphic than you would expect the film, like the TEXAS CHAINSAW MASSACRE works because of the mood it creates. While narratively weak the film still packs punch because of the implications. Something in this film is going to bother you.

Worth a look for those interested in the history of horror and exploitation films.
Posted by Steve Kopian at August 29, 2019