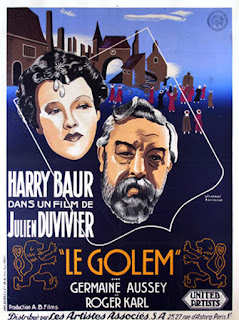 In Prague the mad emperor escalates his persecution of the Jewish population, torturing everyone he can in the hope of finding the golem which he fears will be used against him. When the torment becomes too much the golem is released to take revenge and free the innocent.

Great looking historical thriller has been a film I've been trying to see for decades. While I  had seen stills from the film I never had managed to run across the film until recently. It was worth the wait, especially since if I had seen this as a kid I would have been disappointed. More sequel to the source story than any other cinematic version of the tale, this film is more talk than action. The golem, while discussed as being hidden doesn't appear on screen until almost an hour in. It doesn't rampage until almost the end. As a kid this would have killed me as I waited for the creature to show up. Now as an adult I can appreciate the drama more.

Dark, moody and compelling this version of The Golem is a wonderful historical tale. It really isn't the horror film that its billed as, except in the horrors that men do to each other.  It is a beautifully acted film where the cast sells the tale more than they would for a Hollywood version of the tale. While it can be a bit slow as we wait for the destruction, THE GOLEM is still a winner and worth searching out.
Posted by Steve Kopian at August 28, 2019