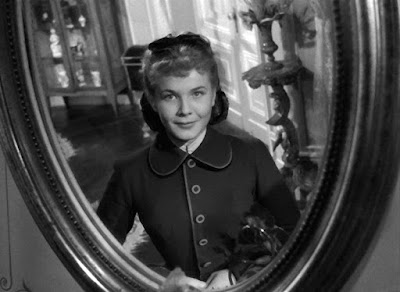 Based on a semi-autobiographical novel by Dorothy Bussy OLIVIA is the story of Olivia, a young woman who is sent off to boarding school. There she finds herself in the middle the tensions of the head mistresses Miss Julie, a family friend and Miss Cara. Over time Olivia begins to fall for Miss Julie as the tension between the teachers grows.

You will forgive me if I simply discuss the film as a film and not as lesbian film, which is the selling point the press material and all of the other recent reviews I've read on the film. While the film is historically important as one of the first films to have any sort of lesbian characters on the big screen,  and while I went into the the film out of curiosity about how the film would handle them,  I ultimately stopped caring, nay even thinking about the fact that everyone on screen was a woman about five minutes in.  For me the film is good enough that I simply fell into the  story and was carried along.

Beautifully acted by all concerned, and looking spectacular, OLIVIA is a wonderful drama on it's own terms. It doesn't need to be sold as anything other than that. Frankly if the film wasn't as good as it is and speaking volumes beyond the fact that all of the characters are women this film would not have survived almost 70 years as much more than a footnote in a book. The fact that it has been lovingly restored proves that.

Like  the earlier and similar MADCHEN IN UNIFORM, it really does transcend being pigeon holed and works because the story of human interactions is very real. We care about the characters  and can relate to their feelings regardless of or sexual orientation. Human emotion is the same regardless of who we love.

OLIVIA is a solid drama on on any terms and is recommended.

The film was originally released in a severely cut version in the US entitled THE PIT OF LONELINESS. The film is finally getting a restored release in the US starting Friday where it will play at the Quad Cinemas in New York.
Posted by Steve Kopian at August 14, 2019