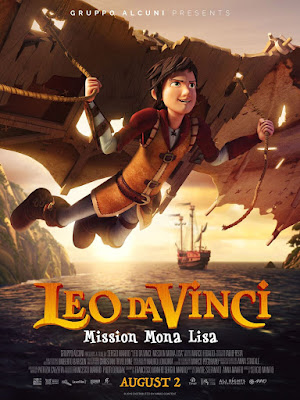 Leo Da Vinci: Mission Mona Lisa is an animated adventure aimed at young kids that isn’t half bad for adults.

The plot of the film has teenage inventor Leo Da Vinci and his friends Lorenzo and Lisa trying to get the money to pay the rent/taxes for Mona’s family after the crops are destroyed. If they can’t get the money Lisa will be forced to marry the young lord who owns the property and she despises. Hearing the story of a lost treasure the trio set off to find it using Leo’s inventions to help them. Of course nothing goes smoothly, the end up with two kids (Niccolo and Agnes) in tow and they run into various dangers including a band of pirates.

For the most part Mission Mona Lisa is a pretty good adventure tale. Moving at a good clip we are carried along from start to finish thanks to some good characters and some nice unexpected moments. As an adult, I knew how this was going to go, but at the same time I never let that bother me simply because the film was never meant for me. This is the sort of film that’s aimed at the smaller set and as a kids film this is something they are going to eat up.

Actually the one thing that bothers me about the film is that it has a good enough story at its center that if they hadn’t felt the need to aim for the under 10 set this actually would have made for a solid adventure film with no reservations.(Hell it gloriously tends to stay away from all the typical Disney/Pixar tropes and sweetness)  While the two small waifs Leo, Lisa and Lorenzo pick up  along the way are funny and entertaining, they really aren’t needed for the story, which shifts from time to time to bring them front and center. Yea, the kids work and provide laughs but their inclusion is kind of out of place and I kept thinking if they weren’t such an obvious effort to give the little kids someone to identify with this would have been better.

Don’t get me wrong Mission Mona Lisa isn’t a bad film, and my comments aren’t supposed to make you thing that. Rather I’m trying to point out that if the filmmakers had just told the story of three friends and didn’t play down to the little folk this would have been a great film instead of just a good one.

Regardless of my quibbles this is an unexpected find of a  film. And I think that if you have kids this is definitely worth a look if for no other reason than it isn't stereotypical sweetness.