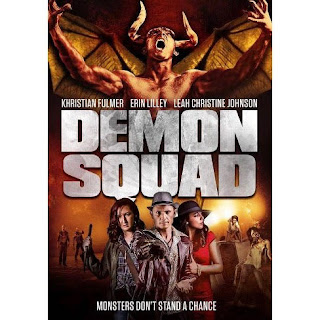 Demon Squad tells the story of Nick Moon, a P.I. (Paranormal Investigator). Nick is in charge of dealing with the cities growing demon population. If a Museum offers you an ancient artifact at a ridiculously low price that should probably be your first clue that something just isn’t right.

Nick is hired by Lilah Fontaine to help find her missing father, Professor Fontaine. Together with his assistant Daisy O’Reilly, the trio arrives at Professor Fontaine’s home only to discover that the ancient artifact has been stolen. With no clues as to who stole the artifact of the whereabouts of Lila’s father, Nick and Daisy embark on a quest to find the truth. Not everything is as it seems and some things are worth killing for.

I really enjoyed this film. Some of the acting is a little rough at times but I think that this adds to the movies charm. Demon Squad is funny, has likable characters, and a solid plot. The story builds momentum quickly but is easy to follow. The ending of the film isn’t what I expected but somehow it feels right.

There is one object in the film that reminds me of a contraption Ichabod Crane used in the 1999 film Sleepy Hollow. I’m not sure if that’s what they were going for but I thought it was a great addition.

The character Nick Moon is a very likable guy, and I really enjoyed the performance of actress Erin Lilley who played Daisy O’Reilly. I highly recommend watching Demon Squad if you don’t mind a little cheesiness in your films. This film doesn’t take itself seriously and in this case it works. Overall I give the film a B+. I look forward to seeing more from Director Thomas Smith, and Writers Erin Lilley and Thomas Smith.
Posted by Steve Kopian at August 20, 2019