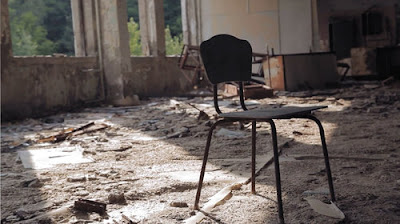 Motherland is a portrait of various people who were or are still living in the city of Pripyat, the city outside of Chernobyl. They relate their stories of what happened when the reactor exploded and their lives now.

A much too large a tale to be told in only half an hour, Motherland cries out for a feature. (That’s a rave ladies and gentlemen)

I say this since the film is so full of great stories that seemed rushed that you’ll want to contact director Colby Blackwill and ask him about all the stories outside of the women who are still living in the containment zone. I want to know more about the kindergarten teacher who fled early when he friend realized they had to go after he witnessed the explosion while fishing or about the woman who works on containing the reactor and trains back and forth to work. These are tales outside of the typical ones we hear and as a result we gain a greater insight to what happened via the same old tales.

I loved this film a great deal and highly recommend it- and hope there is a longer version down the road.

For tickets and more information go here
Posted by Steve Kopian at August 10, 2019