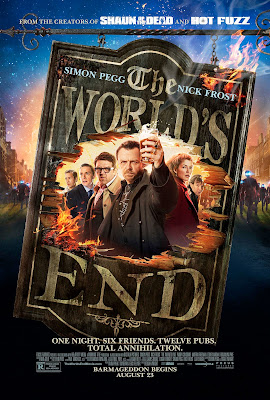 WORLD'S END
Obnoxious addict Simon Pegg decides  his life is unfulfilled and decides to finish a pub crawl that he tried to do with his buddies back when they got out of school but failed to do. Rounding up the reluctant group of middle aged blokes they head off to relive old days and run smack dab into the middle of an alien invasion.

Good alien invasion tale is hampered by and absolute dick lead character. Simon Pegg's lead is not someone I would want to spend any time with and as a result I couldn't understand why any of his old friends went along with his stupid idea. Yea things pick up after the invasion is discovered but Pegg is still a dick and I had a hard time caring.

Also realized I really don't like Edgar Wright films, never liking one of the films he's directed, so what the hell do I know. 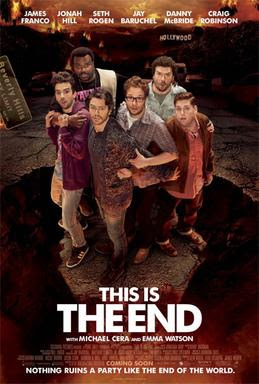 THIS IS THE END
All of Hollywood goes to James Franco's house on the night of the rapture. As all the non-stars are lifted up the remaining actors try to survive as pits to hell open up and demons attack.

Incredibly low brow humor mixes with even baser jokes in a film that was amusing in fits and starts, mostly owing to the cameos of stars going against their perceived personas. I lost interest rather fast as the endless jokes about weed and gay sex simply felt like a broken record. Yea some of it is funny but frankly this is a 20 minute short film stretched to 100 minutes for no good reason.
Posted by Steve Kopian at August 31, 2019