One of the best films you will see this year-What You Gonna Do When The World's On Fire? -opens Friday 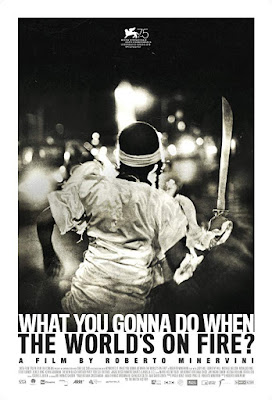 This is slightly modified  repost of the review I ran when this film played last year at the New York Film Festival.  Sadly it did not garner the attention it deserved, largely because the festival did not press screen the film and one had to make an effort to get a screener to see the film.  Forgive me if that sounds snide, it is suppose to because what could be argued was the best and most important film at the festival was shunted to a side bar where the people who should see it, the rich and powerful who fund the festival would never ever see it. (Yes I have a lot of pent up anger concerning this film and NYFF. Forgive me the rich blue hairs need to see this film- as do you.) It was on my Best of 2018 list and I'm going to bet that if you take the time to see it it will be on the your best of 2019 list.

It begins and ends with the preparation for Mardi Gras. We begin and end kind in the same place where some things have changed but not a lot, and little of it for good. And in between we spend a stark year with a group of people trying desperately to not only get by but also stay alive.

One of the opening images is of brothers Ronoldo and Titus in haunted house trying to convince themselves not to be afraid. It is an image of the boys where their masks slip and the make believe horrors over take their ability to remain stoic. It is the sort of image that many will claim is kind of cliche and obvious, and it is, but at the same time there are times when "cliches" are so perfect that you have to use them because they carry a great deal of weight. Here it speaks volumes about what we are going to see.

WHAT YOU GONNA TO DO WHEN THE WORLD IS ON FIRE? is the story of several people in New Orleans trying to not just survive but thrive in a world where people are dying and the system seems/clearly is rigged against them. There are the two teen brothers and their mom who are trying to stay alive in a neighborhood where shootings are regular and as the film starts five people were shot just down the block. There is Judy, who is trying to keep her family afloat and save her bar before it’s snapped up by the creditors who have it in for her. Kevin, who is trying to keep the traditions of the Mardi Gras Indians alive. And there is the local Black Panthers, trying to fight the rampant racism and turn the community around.

Getting better as it goes on, WHAT YOU GONNA TO DO.... is rude wake up call for anyone who isn't living the life depicted...which is going to be the vast majority of the people seeing this film (especially at the New York Film Festival where this film played last year, which had a much too expensive ticket for anyone in the film to see). If you are not person of color living in financially desperate circumstance this film is going to be a jarring because you really don't know what it's like-- no matter how many TV news stories you've watched, New Yorker think pieces you've read or previous documentaries you've seen.

Five minutes in to the film it was clear we are nowhere near any sort of look at race and poverty in America that has come out previously. Yes, there have been other films, some observational, some political,but there have been very few as immersive and as powerful as this. We are in the lives of these people for better and worse. There are no grand triumphs just the endless fight to remain safe.

See this film not just because it is good but because if you are a caring human being you need to know how wrong things really are.

One of the most important films you will see in this or any other year.

WHAT YOU GONNA DO WHEN THE WORLD'S ON FIRE? opens on 8/16 at Film at Lincoln Center, 8/23 at the Maysles Documentary Film Center and 9/6 in LA (Laemmle Glendale) followed by a national release via KimStim
Posted by Steve Kopian at August 12, 2019