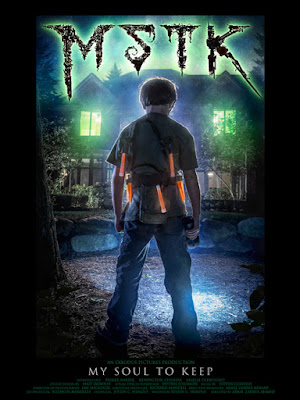 Young boy thinks there is a monster in the basement that is trying to steal his soul so he begins to make preparations for a fight. When his parents leave him with a baby sitter the monster comes to call.

Destined to scar generations of kids into never going into the basement My Soul To Keep is best described as a Home Alone like horror film where the hero fights a shadowy demon. It is going to play best with the younger crowd. Expertly made the film generates suspense but no real scares with a plot that at times seems more interested in being like the aforementioned Home Alone or Goonies than a balls to the wall horror film. While there is nothing wrong with this, and while I was completely entertained by the film, I would have liked a chill or two.

Recommended for adults with a nostalgic sweet tooth or kids who want to dip their toe into the pool of horror.

MY SOUL TO KEEP plays the Festival of Cinema tomorrow (8/9). For tickets and more information go here.
Posted by Steve Kopian at August 08, 2019