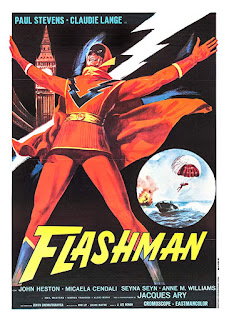 Oddball Italian superhero film has a British noble masquerading as Flashman, a superhero taking on counterfeiters, invisible gangsters and other baddies.

While knowingly silly, the film still manages to be somewhat serious with the performances never going over the top even if the situations occasionally are. There are some good action sequences as well. As good a time as I had watching it I would have had a blast if I had seen it with friends so we could riff it.

Email ThisBlogThis!Share to TwitterShare to FacebookShare to Pinterest
Labels: adventure