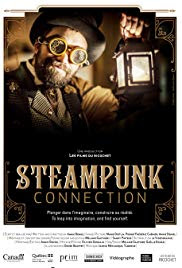 Portrait of the steam punk community in Canada and the US is a hit or miss affair. Part look at the people who have made the melding of Victorian style and technology  a way of life and partly a celebration of the look and style of the imagery it creates, it bounces from glorious to just okay and back again.

A big part of the film is that if you've have an interest in steampunk, you've been here before. Odds are you've seen a couple of similar films previously. I know I've seen reviewed a couple here at Unseen Films that covered similar portraits of fans of the "genre". Having seen the other films there is nothing new here other than the people profiled. If you click with the various people then you will enjoy this film ore than I did.

For me the point where the film soared was with its clips of a steampunk world. Looking at the images of the various steam punk creations, or watching the film clips that show us a world that might have been are magical. It was the fantasy images more than the real people that kept me watching.

If you're a fan this is a must. If you don't know what stea punk is take a look. If you've seen other steampunk doc, flip a coin.
Posted by Steve Kopian at August 01, 2019