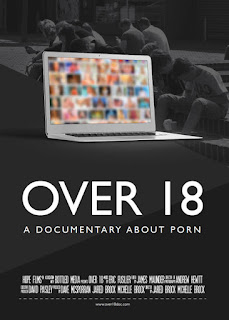 Documentary meditation on the effect of pornography on children and adults who view it and make it.

While well made,  OVER 18 suffers from several factors the chief of which is it only runs just over 70 minutes. Way too short to truly have a rational and reasoned discussion, the film simply puts it's view point out with an occasional peak at the other side. As someone who has been in the porn trenches for decades, both as a former manager of a store that rented VHS tapes and as an occasional viewer, I am well aware that the problems with the industry and, especially, its consumption are way way too complex to be solved in so short a time. Even if you assume it's bad for kids you are still left with volumes of questions that need answering - not the least of which are the larger and much more important one involving society in general and parenting.

OVER 18 lost me early on and just had me talking back to the screen with important questions it never ever tried to resolve.