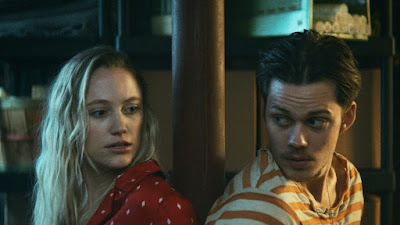 When I finished watching VILLAINS, which played last night at Lincoln Centers Scary Movies 12, I popped on line to see what everyone else thought. Intriguingly I found that most of the reviews were almost identical (to the point they all seem to have been written by the same person) saying that the reviewers liked the mix of comedy and horror. Only a very few were not in love with the film, feeling, as I do, that the film never quite gets the mix of laughs and chills right.

Normally I don’t look at reviews for a film until after I finish a piece, but this time out I wanted to see if other people felt like I did. I shouldn’t have cared but since VILLAINS was the opening film of this year’s Scary Movies I wanted to know if I was missing something. Apparently I didn’t miss anything I just didn’t click with it.

VILLAINS has a couple of sweet kids (Bill Skarsgård and Maika Monroe) robbing their way to Florida where they hope to set up a business selling sea shells. After hitting a gas station they quickly run out of gas in the middle of nowhere. Seeing a nearby house they head off in the hope of wither getting gas or another car. Instead they find themselves in the home of a weird couple (Jeffry Donovan and Kyra Sedgwick) who have a young girl chained in the basement. Humor mixes with growing tension as the couple are found to be not only weird but deadly.

How you react to the film is going to depend on how you react to the humor. A full on comedy that grows darker over time you have to connect with it over the top craziness at the start or you’re going to be locked out of the film. I was amused but thought they were trying too hard to be rib tickling.The trying too hard continued with some of the ghoulish twists and turns which chilled but seemed more forcing the hand then natural. It created a disconnect on my end which made me notice some plot turns which had me wondering why the couple didn’t just walk away when they had the chance.

And while I am not in love with the film, I am in like with it. It does have both laughs and chills, something most recent horror comedies fail to achieve. I like the film enough that I did the rooting around to try and find the answer as to why I wasn’t loving it.

Is it worth seeing? If you like ghoulish confections, absolutely. However at the same time I do warn you that your mileage may vary.