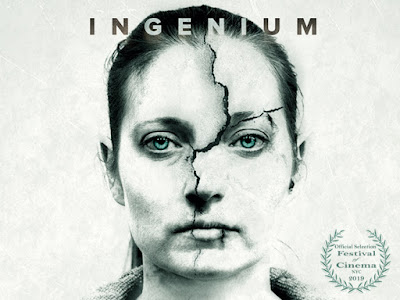 Felicitas’ life is turned upside after a solo trip to Thailand goes wrong. Returning home and on the run she finds what she thought was her life isn’t. As people close in she has to track down her best friend Natascha, who is locked up in an asylum.

Don’t blink head game thriller requires patience as it plays out its reality questioning scenario. Don’t look away or go to the bathroom, especially in the early going or else you may miss something. I say that because I looked away for a couple of minutes at one point and felt lost.

To be honest I’m not certain what I think of the film. While I like good films that make us question what is going on, there are times when you run across a film that makes you wonder if the writer and director are messing with reality because they can’t get the film to work any other way. There were times as the plot threads were beginning to knit themselves together that I began to ponder if this was the case with Ingenium. Things seemed to be happening because that was the only way writer Michael Knoll could get them to work. It wouldn’t have been bad if they all lined up in the end (these things should lineup in the end) but I don’t think they did.

Then again things never clicked enough for me to try and work out if it all worked. And that’s a shame because there are some great performances here as well as a some really well done action set pieces which kind of get lost in the plot. While the film isn’t bad it never pulls it altogether enough to be better than just good.

A disappointment
Posted by Steve Kopian at August 04, 2019