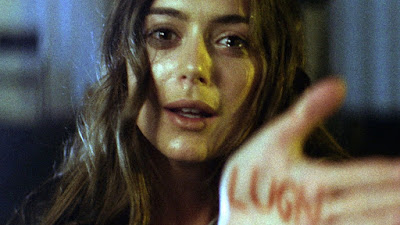 Two sisters listen to a record album to help them relax, however it's talk of magnetic hypnosis rips open doorways to other dimensions.

Scary and disturbing horror film begins by putting us in a weird place from the opening narration and then refusing to let us go until the final fade out. Full of dark disturbing images and ideas this is a film that left me scrambling to find a means of getting it out of my head.

This is a film that puts us into a unique world with unique rules and we can't escape. As the sisters slide from our world to the next we are with them, which means we are just as lost as they are. Reality becomes malleable and the monsters are coming...and we are so much better for it.

What I love about this film is it feels like any number of strange inde  or Euro films that appeared in the late 1970's and early 1980's with stark colors and electronic music. This film is a kind of cousin to the recent  BEYOND THE BLACK RAINBOW. The feel brings me back to all the films I was hunting in the early days of home video.

The best thing I can say about the film is I want to not only see it again I want to inflict it on my friends. 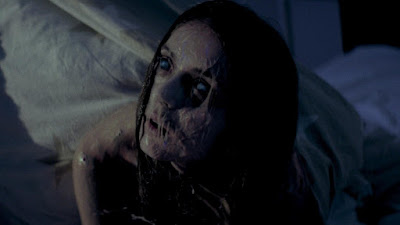