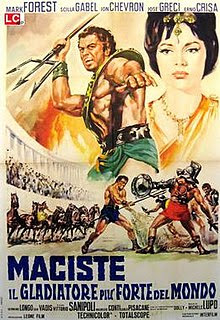 Maciste is back in action helping a young queen battle the forces who want her throne. The bad guys are a band of gladiators hired for their skills.

One of the more enjoyable Maciste  film has the right balance of action, comedy and intrigue. While we know everything is going to be alright- Maciste is Maciste after all, we can't be certain what is going to happen to him before the final fade out.

The film benefits from a serious production tat keeps the sets reasonable real and doesn't allow the proceedings to drift into the realm of outright silliness. The action is also really well done with the muscle man nonsense never getting out of control.

I really like this film and highly recommend it.
Posted by Steve Kopian at August 22, 2019