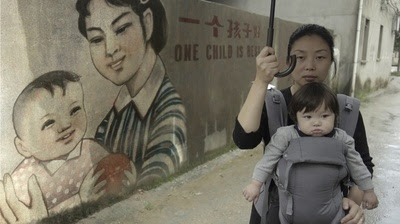 With ONE CHILD NATION opening Friday I am reposting Joe Bendel's review from Sundance.

From 1979 to 2015, there was a regime very much like that in The Handmaid’s Tale, but instead of prohibiting abortions, they mandated them—along with involuntary sterilization (of mothers, not fathers). When China’s notorious One Child Policy was in full effect, the Communist government relentlessly intruded into bedrooms and families’ lives. The draconian mandate has been relaxed to a “Two Child Policy,” but the guilt and emotional pain persists for the parents who were forced to comply. Filmmakers Nanfu Wang & Jialing Zhang expose the resulting trauma, both on a national level and within Wang’s own family throughout One Child Nation, which screens during the 2019 Tribeca Film Festival.

As a poor rural family, Wang’s parents were allowed to have a second child, as long as they were at least five years apart, but it was still strenuously discouraged. She quite pointedly remembers the shame she felt in school when it was discovered she had a sibling. However, when Wang had her baby boy, she started to reconsider all the propaganda she had been fed during her youth.

As the New York-based Wang starts to ask questions of her Chinese family, she discovers unknown cousins who were abandoned (ultimately, to their death) and a profound sense of shame amongst nearly all her relatives. Being good documentarians, Wang and Zhang do not stop there. They follow the trail, interviewing the village headmen and family planning apparatchiks who enforced the policy. They also challenge preconceptions of the human traffickers who effectively saved thousands of abandoned infants by “selling” them to orphanages, which supplied the lucrative Western adoption market.

One Child Nation addresses a lot of hot-button issues, including the role of human traffickers in China, the pervasiveness of state propaganda, the overwhelming cultural gender preference for boys (and the inequalities that come with it), and the systematic deception of Chinese orphanages that lied about the background of their charges and often split up twin siblings. Yet, every topic arises organically out of the filmmakers’ investigation. This is a tight, focused film—it just happens to have an awful lot to say.

Wang’s Hooligan Sparrow might just be the gutsiest documentary ever made, so it is a heavy statement to call One Child Nation a worthy follow-up. It might sound like it is old news to the half-informed now that the Communist Party is flogging its Two Child Policy, but she and Zhang make it crystal clear how profoundly the One Child Policy damaged China’s social fabric.

Frankly, this is sometimes a difficult film to watch. The images of cast-aside fetuses and babies will surely break your heart and possibly turn your stomach (wisely, these are incorporated sparingly—just enough to establish the truth). Very highly recommended (especially for Women’s March participants).
Posted by Steve Kopian at August 05, 2019