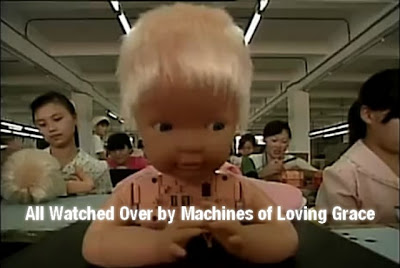 From Adam Curtis the man behind the amazing The Power of Nightmares comes the equally amazing All Watched Over by Machines of Loving Grace.

Prepare to have your way of thinking challenged with a full meal of food for thought.

The guiding idea of the series is how various ideas that are based on objectivism, rationalism, science and computer like thought, which we hoped would change the world and at last put control back into the hands of the people don't work in the real human world, nor in nature (despite what we've been told), and worse, they maybe leading us down a fatalistic road. It’s a view that seems to run counter to the way most people think these days.

The first part of the film begins with Ayn Rand and her Objectivist thought that she laid out in her novels. Her idea is that if we are rational about what we do and we couple that with watching out for ourselves, in selfish ways, we won’t need altruism or government intervention and the world will run better. The trouble is that it doesn’t seem to work. Rand’s personal world was wrecked by the fact that her perfectly logical house of cards was shattered when a rational affair broke up due to infidelity. Worse the economists and business people who took Rand to heart in the 70’s and 80’s were the same ones who are cooking the books across the globe and sinking the economies of the world for their own gain.

The second part of the film deals with our notions of the nature and ecology. While the idea of nature as a closed interdependent system has become the preferred way of seeing things, indeed to the point that that we’ve tried to build societies on its principles, science is finding out that isn’t the way it is. Nature is not a closed system that tries to maintain equilibrium, rather it’s a dynamic system that rests and goes in a new direction with each upheaval. Curtis shows how the populist movements like the revolutions that have sprung up across the globe are like this, and how they peter out because the networks of people can’t move things forward. This is why communes don't work and why the idea of a network of people can bring change but not take you forward unless you have a leader.

The third part is how concerned with how viewing humans as machines tied to a genetic programming that keeps us aimed at only driving our genes forward will hobble us as a society and as a species. The problem is that viewing people as machines it will drive us into some dark places such as eugenics and genocide, and will ultimately prevent us from actually solving any problems since everything will be reduced down to It's genetics and there is nothing we can do.

I don’t think its possible to go through the entire three hours with out having some part of your world view shaken up. I know I was rattled by several things I saw in this film simply because I had never seen the ideas put together in quite this way. It’s clear that what we think is commonly held to be true isn’t what real science says it is, and that what we think will correct things maybe driving us in another direction.

In all honesty I don’t know what I think about it all.

I watched the entire series in just over five hours, breaking for dinner and to get distracted by an Alfred Hitchcock film. Several days on I find I haven’t had time to digest it. Frankly I don’t know what anyone who sees this at Lincoln Center will think, since it will be 3 hours straight with no time to digest it until its done. (The series was originally run over three weeks, which is probably better).

Rarely has my mind been so stimulated, for good and bad, by anything.

I’m impressed that Curtis managed to throw so much material out and have us follow what he is getting at. There is so much here, history science, philosophy that it's clear that Curtis trusts his audience to be able to juggle numerous balls.

Truthfully I think that the first two episodes are fantastic and they really manage to get the point across. Unfortunately the third episode kind of loses the plot. I don’t think Curtis makes his point all that clear, especially after rambling around for an hour. Where Curtis starts, saying that we are ultimately machines is the point that he ends with, with the addendum that to view us that way is a fatalistic cop out since it only means we can’t change anything. I find nothing wrong with the point (though I would like to argue against it, especially in light of some of the material in the first two episodes) rather I find that Curtis fails to make his case. There is no chain of logic. There is many interesting ideas behind it but there is little in the way of proof, other than saying that the mathmatical equations suggest it. (Though to be honest I'm still trying to work out what he ultimately means so I could be way off base)

While the series is playing at Lincoln Center on the 18th, I’m happy to have tracked down the series on DVD because it will allow me to revisit it (which I need to do since I was watching the final part way past my ability to truly follow what was being said). The DVD also allowed me to loan out the films to my friend lou who called me half way through the second episode to engage me in a long conversation on what he had seen.

See this series. See it all. See it with friends and make dinner plans for after since you'll have lots to talk about when its done. This is a series you can not simply walk away, it forces you to engage with it whether you want to or not.If you can go see it on the 18th at Lincoln Center, if not it can be found on DVD and on line at Adam Curtis website.

(You’ll forgive the lack of detail but anything beyond what I’ve done would require an extended discussion on what the film is saying, and while I would love to do so, this isn’t proper forum)

Details for the screening on the 18th can be found here 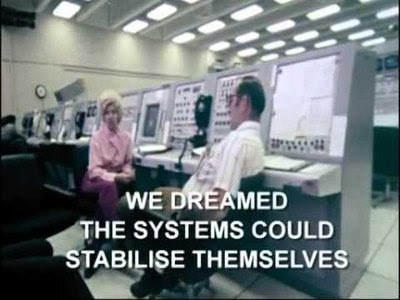