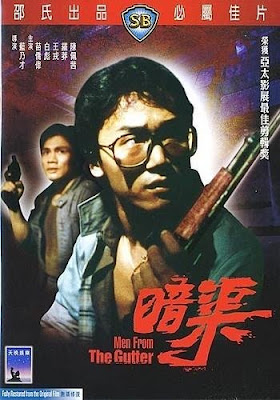 Marc Walkow, one of the founders of the New York Asian Film Festival, tweeted about this film a couple of weeks ago asking why he had never heard of it. If he, with all of his vast Asian film knowledge, had never run across it how could I ever hope to know about it? Thank god I follow his tweets otherwise I would have missed one hell of a wild ride.

This Shaw Brothers film concerns several different groups who all collide over the course of the film.

The film opens with an ex-con leaving his house and running into the police. They chase him but he has to kill one of them to get away, making his arrest all the more important. The ex-con and his friends are planning a heist which they hope will get them enough money that they can get the hell out of Hong Kong.

There is a hit man who has come to town to take out some crime bosses. Its not clear why he's in town at first, but it does result in several great action sequences, including one that makes a case for squash as a full contact sport.

There is the crime boss who runs the town and who is wondering who it is that is gunning for him and why.

Lastly we follow the cop who ends up in the middle of all that is going on. He's a no nonsense sort of guy who isn't unwilling to break heads and take names.

How it all comes together is the film - and how it comes together is amazing with several fantastic set pieces as the assassin tries to take out his targets, the ex-con and his friends try to get enough money just to be able to pull off their robbery and the cops try to stop them all. Its an escalating game of violence that ends in a storage facility where things, literally, come crashing down (This last piece alone is worth the effort to track this down).

By the time the film was done around 2AM last night I wanted to put it on again and watch it all over again.

How come I never heard of this? More so since its from Ngai Kai Lam who made, among other excellent films, Riki-Oh:The Story of Ricky.

I'm guessing that the reason this film isn't better known is that the film is it's from the waning days of the Shaw Brothers and as such fell through the cracks. Its also from the time when Tsui Hark and other young guns were coming in and shaking things up in Hong Kong.

I don't know what the situation is with the film having a US release, I picked up a used copy from an Amazon e-seller, it's marked as being region 3, and from the massive release of all of the Shaw Brothers films from a few years back. However I would think there are other editions out there. What ever the case is, if you like action, especially of the Hong Kong variety make the effort to track it down.

Ideally I would love the the New York Asian Film Festival to get their hands on this because I think audiences would go crazy. (Hey you guys listening?) I want to see this with a truly appreciative crowd.

The film is out on DVD and worth the effort to track down...

(One word of warning, the blood used in the film is the only flaw in the film. It's that overly bright red paint that companies used because it looked great in color movies but has no real connection to reality) 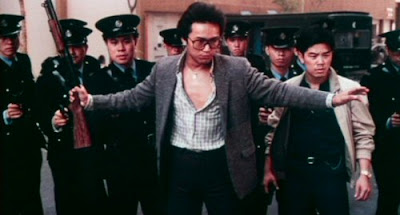