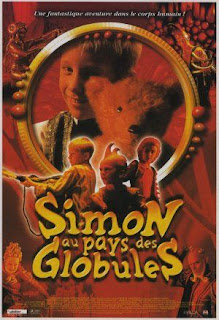 As part of the Lincoln Center Film Society Family Series this film will be screening this Sunday at 2PM and on the 26th at 11AM. Tickets are 6 bucks and it's worth checking out.

A little kid who lives with his grandfather shrinks himself, with the aid of his teddy bear, in order to go inside his grandfather's body to see whats making him ill. With the help of two "people" he meets on the inside he sets about making his grandfather well.

Sue me I really liked this movie. I have no idea why I should have warmed to this kids film but I did. Perhaps its the design (which is just neat to look at) and the sense that there is something behind the story beyond just being a live action Osmosis Jones for kids. I think it helps that it is very clever a good deal of the time. This is a kids film that just tells its story and so it becomes something more than just a kids film. Its a film adults will like too.

No, its not perfect. I could pick it apart by saying the talking teddy bear oddly done, the real world stuff just misses and the pacing is off, but whats the point? Despite any flaws I still I liked it. Though I do have to admit that in many ways its better in the parts than as a whole.

Definitely worth trying if you run across the film, especially if you are open to good, but not great kids films, with really cool looks to them.(And as I said at the start the film is screening at Lincoln Center the next two weekends. Details are HERE)
Posted by Steve Kopian at February 15, 2012