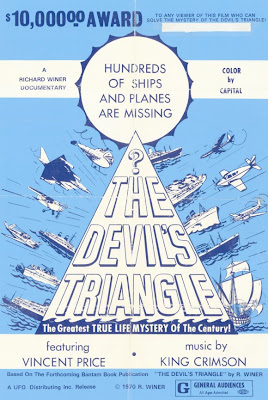 Richard Winer's documentary scared the living snot out of me when I saw this in the movies way back when. I saw this in a double feature with the fiction film UFO Target Earth and between the pair of them I didn't sleep for several nights afterward. Watching it in the theater it made me want to crawl under my seat.

To truly enjoy this film you have to turn your brain off and take this for what it is, a ghost story of questionable veracity narrated by the great Vincent Price. It's was scarier than most horror films because "its based on fact" and because Price sells the stories to the nth degree.

I have no idea how true any of it is. Over the years I've heard the stories bandied about so much by people saying the stories are true or false that I don't really believe anyone on either side. Frankly I don't really care. What I do care about is that this film, though dated (the effects are clearly 1970's independent cheap) is great deal of fun. Its creepy and scary, and if you are crazy enough to sit and watch the film with the lights out it's liable to send chills up and down your spine.

Watch it as the cinematic equivalent of a campfire story. Don't try and deduce if the "claw" is real just go with the flow and you'll have a blast.

The current running time is 52 minutes. I remember it being longer than that- and I can't imagine any theater in the 1970's booking a film that ran under an hour. The poster for the film (see above) lists it as having music by King Crimson, I don't know if that's the case now, and I suspect if not the film has been trimmed for rights issues.

Definitely worth seeing if you can run down a copy. I think the film is only out on out of print VHS tapes...though it can be had on the collectors market.
Posted by Steve Kopian at February 22, 2012