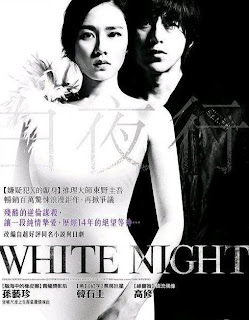 Tuesday the Korean Cultural Service screening is a really good thriller called (In to the) White Night.(The length of the title depends on the source). It's based on a novel by Keigo Higashino, which was turned into several films and TV series over the years, the latest a Japanese version that closed last years Japan Cuts at the Japan Society.

The film concerns the murder of a recently released ex-con. He was found in a manner that has baffled the police. Unfortunately for one of the cops investigating the murder kicks up memories of a couple of unsolved murders 14 years before, murders the dead man was suspected of committing. The story then connects things to the children of the original murder victims, whose life we see now and in the time since the original murders.

I really liked this film a great deal. There is something very haunting about it. I'm sorry if that critique was a bit bland but this is a film that is very hard to describe and due justice to without giving too much away. I had wondered why most descriptions of the film only ran one or two sentences and I realized that there is no way to simply explain it with out revealing too much. There is so much to it that I completely understand how the story was the basis of a TV serial.

Beginning with an opening sequence which is is among the most arresting you'll see, (trust me I wasn't expecting it and it made me sit bolt upright and go "Hello") the film shifts gears to the twisting story of intertwined murders a decade and a half apart. Its the sort of film that builds as it goes along, which means you can't bail on it or else you're going to miss stuff. Actually sitting at home watching the film my attention wandered for a bit early on and I was cursing myself not long after since I had missed stuff. Thankfully I had my dad there to explain what I had missed. This one of those stories that isn't over until the end, so stick it out.

Actually the perfect way to see this film would be to see it at a theater, at say the Tribeca Cinemas on Tuesday night, where you'll be fully focused on the screen. (I saw the film on VCD, which is apparently the only way outside of going to a theater that you can see it...that is assuming that you can actually find a VCD copy)

Go see this film. Its a nifty little thriller that will hold your attention more than most recent American ones.

As always with these FREE screenings doors are`at 630 and the movie is at 7.

BUT WAIT THERE"S MORE----
The Next series of films are ROmantic Comedies:

Tuesday, March 13 @ 7pm
CYRANO AGENCY (2010)
The biggest romantic hit of 2010 (grossing only slightly less than Harry Potter and the Proper Noun: Part 1) this big budget romantic comedy won “Best Screenplay” and its star, Lee Min-Jung (Boys Over Flowers) won a truckload of “Best New Actress” awards. Full of irreconcilable differences, beautiful stars and ridiculous, laugh-out-loud plot twists, it’s all about the Cyrano Agency, a matchmaking service that sets up elaborate, Mission Impossible-style scenarios to help their clients win the man (or woman) of their dreams. Now, their 100% success rate is in danger because a sad sack hedge fund manager wants to date a free spirited gal who just happens to be the head of the Cyrano Agency’s ex. Hollywood hasn’t made a movie this frantic and romantic in decades.

Tuesday, March 27 @ 7pm
MY GIRLFRIEND IS AN AGENT (New York Premiere, 2009)
Opening at number one, and staying in the box office top ten for nine straight weeks, MY GIRLFRIEND IS AN AGENT is the Korean version of Mr. and Mrs. Smith. Kim Ha-Neul gets dumped by her boyfriend, Kang Ji-Hwan, because she’s never around. Actually, she’s a spy. Three years later, he runs into her again, only now he’s also joined the intelligence service too, albeit in a different department. Now they both have undercover identities they both have to keep hidden and they’ve got secret missions they both have to fulfill, while working out the trauma of their past relationship. Full of high-speed chases and plenty of glossy gunplay, it’s easy to see why a movie this fast on its feet is already slated for a Bollywood remake.

Tuesday, April 10 @ 7pm
PETTY ROMANCE (US Premiere, 2010)
A word-of-mouth hit in 2010, this romance is set in the world of manhwa (Korean comic books), and the couple at the center of the story have chemistry to burn. TV star Lee Seon-Gyun is a struggling manhwa artist who enters a competition with a massive cash prize. To raise his chances of winning, he hires a sex advice columnist, Choi Gang-Heui (star of the breakout hit, My Scary Girl), to write his erotic comic. Little does he know that she plagiarized her column from the Kama Sutra and the Kinsey Report because her ideas about sex are a bit…vague, to put it kindly. PETTY ROMANCE been winning hearts and minds on the film festival circuit for a year and it’s a guaranteed crowd pleaser.
Posted by Steve Kopian at February 24, 2012