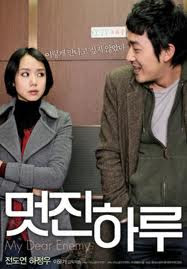 Originally I was thinking that with so much going on this week and simply not having time to go back and write up many of the films in theLove Will Tear Us Apart series at the Japan Society, we here at Unseen were going to be reduced to simply trying to review any films we attend. On the other hand I couldn't really let the series go without putting something up, so I rooted around in my DVD collection and pulled out my Region 3 copy of My Dear Enemy which had I hadn't managed to watch before. The film is screening Saturday afternoon at 4:30.

It all begins when a young woman in need of money tracks down the ex-boyfriend to whom she once loaned some money. He's in a betting parlor with some friends. She confronts him, and he agrees, after some talk, to get her the money. The trouble is he's broke, actually worse off than she is, but he assures her he can get the money. She doesn't trust him, so refuses to let him out of her sight...with the result the pair goes off to get the money...mostly from the many women from his past.

You can probably guess how some of this is going to go: She's uptight, while he's a conniver. His free spirited, take it as it comes nature conflicts with her desire to get her money and get out of there. Then again the film isn't what you expect.

A slowly building character study, this film is either going to thrill you or bore you. The whole film is essentially the two ex-lovers driving around trying to get the money.There are no grand emotional climaxes, He begins to crack her stern facade and she begins to see him in a different light, thats about it. The film is very much like a short short story (which is what it's based on), its a brief stay with some characters, not a whole journey.

I like the film but I don't really love it. I like the characters, the guy really reminds me of one of my cousins. I like the set pieces. What I'm not to thrilled with is the fact that the film runs over two hours. Its not that the film has anything wrong with it, rather it's simply that its too long for what it is. I got to the end and was like, that's it? Apparently. As I said, it's a brief stay, we meet up with the characters, travel for a while with them and then go away with things unsaid, unexplained and somethings hanging.

That said, now that I know how the film goes I'm planning on trying it again. I think had I known what the film was, a slice of life, I wouldn't have been expecting something else, say a conventional romance.

Reservations aside, I think if the subject interests you you should definitely give the film a shot. Its got some great characters, lots of witty dialog and a wonderful visual sense. (I especially think it's worth seeing if you're going to any of the other films showing Saturday like Air Doll or Vital.

Details on all screening can be found here. 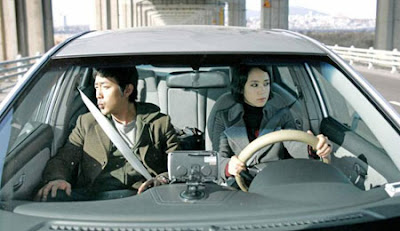