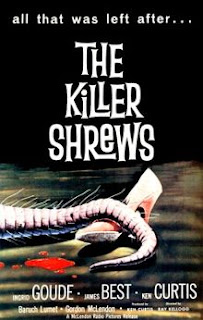 What is it about mad scientists and deserted islands? Apparently it’s a prerequisite to not only be not only mad but also antisocial- or maybe that should be considerate since if you stay on a deserted island you’re less likely to have your stupid experiment injure someone... As a safety warning I’m going to tell you why you shouldn’t get off any boat that lands on a desert island inhabited by collies with fangs.

The Killer Shrews is a drive in classic. Its an utterly preposterous film (it was on MST3K) about scientists who take tiny shrews and grow them to the size of large dogs (they are played by collies with fright masks) which then get loose and then try to eat everyone and everything that gets in their way.

It’s a film that is stupid as a stick and a great deal of fun.

The reason the film works is that the cast plays it painfully straight. There is no hint that they are finding it anything other then deadly serious which somehow manages to make the proceedings work.

As I frequently say this ain’t high art- which means we are oh so much better for it.

What I like is that the serious tone mixes with some moody black and photography in order to make a slightly creepy, tense on it’s own terms film. There is no denying that the film generates a certain amount of suspense since the filmmakers kind of plot themselves into a corner which they some how manage to get themselves out of.

A neat little movie perfect for a Saturday night on the couch with popcorn, soda and stack of Drive In movie sort of titles. 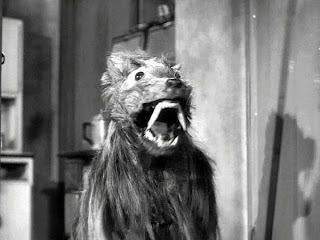