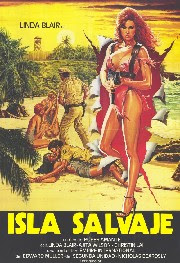 Patchwork women in prison film was made from combining two Euro-shockers (Escape from Hell and Orinoco: Prigioniere del sesso) with some new unrelated footage.

The new footage has Linda Blair (who shoots security guard Penn Jillette in an blink and you'll miss it role) going to confront the man who runs a mine in the jungles of South America where women are abused and forced to dig for gems. Blair says she was one of the girls in the camp and once we get the confrontation the film flashes back to a group of women going to the island and being abused (the footage cut from the earlier films)

This toned down version of the earlier films is an okay movie on it's own with some stand out moments. Its very much of its type with all sorts of abuse heaped upon women who eventually revolt and then make a mad dash into the jungle, however there are a few moments where the film creates some genuine tension and creepiness that lift it a bit above the typical voyeuristic level that these films normally operate on. Of course its not high enough to make this something you'd want to watch with your mom (unless she liked these sort of films) but if you're in a mood for this sort of thing you could do worse.

When I was putting together this series I started to look at some films I hadn't seen before, one of which was Escape From Hell, which was used to make Savage Island.

Watching the film I was struck by a couple of things . First off the film wasn't really good on any level. Its simply women in the jungle being abused, getting naked and then then taking revenge. Its a very amped up but by the numbers story that takes everything that films like The Big Bird Cage did right and just made it sleazy.

Fifteen minutes in I wanted to take a bath... and then it hit me I had seen this film before, but where?

Jumping on line I looked it up on IMDB and I found that I had seen Savage Island, which to my mind played better than the original source film. Pulling my IMDB review, which makes up part of this piece, I've added these additional comments about Escape From Hell.

Honestly if you want pure sleaze go with the Escape From Hell. If you want something that won't require a long hot shower and gallons of disinfectant go with Savage Island.
Posted by Steve Kopian at February 14, 2012