Renezvous with French Cinema to be simulcast across the US 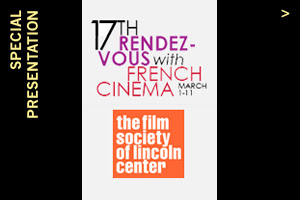 I do answer emails---

I got an email from an Unseen reader asking me me if I knew any additional details about the simulcasts mentioned in the press release of, and website for, Rendezvous with French Cinema, specifically which theaters were going to show the films. Having gotten lost in the titles I had to admit I missed missed the simulcast part, but going back and looking at the press release more closely I saw the piece in question...

The big news is that those of you who live in the US and can’t make Lincoln Centers killer Rendezvous with French Cinema, are not out of luck since seven of the films, complete with post film Q&A’s, are going to be broadcast across the country by Emerging Pictures. Yes that’s right the people behind the series have struck a deal with the people at Emerging to share the films and the in theater talks with people across the country.

The films chosen for simulcast are as follows (times and dates are of the live New York screening):

If you're not in New York and you love French film, do yourself a favor and bookmark the Rendezvous Near You web page about the series playing near you or the Emerging Pictureswebsite for the series and check back. I’ll let you know that things have been updated as soon as I find out myself.

Seriously having been to many events at Lincoln Center I’ll tell you that you’ll want to see the Q&A’s because they get the best people to do the interviews.
Posted by Steve Kopian at February 11, 2012