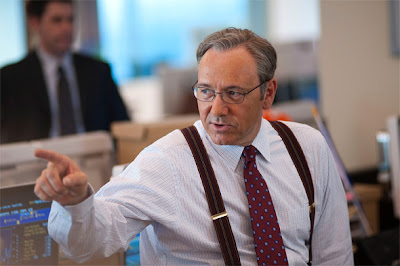 Frightening drama about a trader in a brokerage house who discovers that the securities it's selling are worthless. Fired before he could tell anyone, he passes on a flash drive to one of his juniors. Looking at the information his junior discovers whats going on and tells his bosses who realize just how bad things are...

If you want to get a sense of what happened on the last Wall Street crash, this is it. Its a frightening tale of people shifting valueless papers around in the hope of just surviving...

I really liked this film. I missed a press screening back when New Directors New Films screened this as one of it's selections in 2011. Part of it was a bad screening time and part of it was I was afraid it was going to be too technical. I talked to several people at later press screenings and many of them seemed very high on the film. They all said, rightly, that you don't need to know about finance to understand whats happening. As several characters say," tell me as you would a child". Actually it's even simpler than that the whole point is that the brokerage house has less money than the securities are supposed to be worth, if you understand that you're good.

The reason this film works so well is the cast (Zachary Quinto, Kevin Spacey, Demi Moore, Stanley Tucci, Paul Bettany among others) is top flight. These guys sell the story. Its real easy to beleive them to be both saints and sinners. Amazingly, even as bad as many traders are portrayed in the media, these guys, most of them anyway, come across as not quite as bad as you might think. Honestly I would have jumped to see any film with this cast, but the fact that the story is as good as it is is just a nice bonus.

Is it one of the best films of the year? Probably not, but it is a real nice surprise and a real find. Let me put it this way, I really think that once this gets to cable this will be one of those films I stop to watch every time it's on and I run across it

Currently out on DVD
Posted by Steve Kopian at February 29, 2012