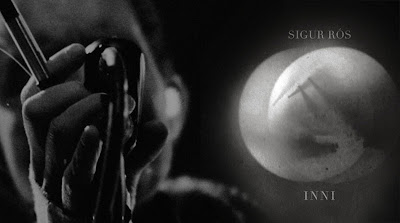 The Spectacle Theater in Brooklyn posted a trailer for the concert film Inni from the Icelandic rock band Sigur Rios in connection with some up coming screenings. Having no idea who they were or what the film was -and liking the image posted (see above) I clicked on the trailer and fell in love. Moody black in white images and trippy music had me thinking the whole film couldn't be like that...

Yea it could...and yes its made me a fan of the band.

This is an often hypnotic and magical film that like many of the best concert films concentrates on the music. Its a film that is trying to create, I think, an experience that is like when you go to a concert and the lights and the music combine to take you somewhere else. You're no longer in an arena or theater but traveling along the riffs of the music somewhere. Inni, is in its best moments the perfect sort of concert going experience- one that transcends everything to put you in a place beyond words into a place of pure emotion.

Its a mostly black and white film that simply uses the soundscapes by Sigur Ros to provide background for some truly hypnotic images. It's largely images from one of their concerts manipulated so that you get grainy images bleed and shift. Lights strobe, images flicker. We have the background projections taking the foreground, lights cutting across the frame, ultra close ups, blurred images that aren't clear....

...and on the soundtrack the music. Occasionally jarring electric noise, mostly a soaring blend of voice and music creating a hypnotic sensation especially in a darkened room. I have no idea what is being said, it doesn't matter since the vocals and the instruments combine to provide a wonderful raft that one can float away on.

Because there is no real dialog, only song, I have no idea what anything is called or where one ends and another begins. It doesn't matter since it all sounds wonderful.

This is a 75 minute cleansing of the mind and spirit.

You'll forgive me if I don't go into details as to songs and details of the group, I don't really know them because until I picked up the film I didn't know anything about them. I know only the film. Also the songs are in Icelandic so it's hard to say more than they sound good.

To me the only thing wrong with the film is that there are a couple of sequences in color. The bits aren't bad, it's just that they break the spell that the main portion of the film creates.

I should state that I did not go to the Spectacle to see the film, I bought the DVD/CD combo pack from Amazon. Having seen the film on DVD I know I should have gone to see this on a big screen. This is one cool looking film that cries out to be seen on as big a screen as possible so that you can fall into it and get lost. Thankfully the film is playing a few more times at the at the end of the month so I may go see it yet. I suggest that if you're in New York you get down to Spectacle and see the film when it plays.

One of the finds of the year, and possibly one of the best films. I'll let you know after I get to watch this in a darkened room with a good sound system.

(I should point out the DVD has several extra concert pieces included. I'm not sure why they were cut other than they seem to be a tad more conventional looking than the rest of the film.)
Posted by Steve Kopian at February 11, 2012