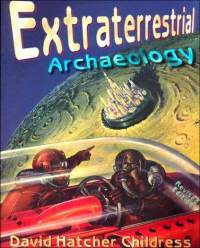 Film version of David Hatcher Childress's book is one of my most loaned out movies. When I first got a copy of this and started talking about it and showing it to friends everyone wanted to see it...over and over and over again. There is something truly mind bending about the film that gets the grey cells going.

The film is essentially an illustrated lecture by Childress showing all of the weird anomalies that can be found on the moon, Mars and other planets in the solar system. What are the source of the weird trucjk tracks on the Moon, how about that weird thing seeming to hoover over the surface of the planet? Like the face on Mars it's all open to interpretation, but I dare you to watch this film and not begin to wonder if we are not alone in the universe.

Is it true? Who the hell knows.

Does it really matter? No it doesn't.

This is simple a great little film that will get your mind going and make you wonder whats going on...or went on since Childress says that some of the strange sites are hundreds or thousands of years old.

I really love the film a great deal and I will occasionally spring it on people who are just a tad skeptical. Usually they will poo poo everything but by the end you can see the resolve crack as the will invariable see something that will make them wonder what they just saw.

I have DVD copy made from my VHS tape. The film now is officially out on DVD from Adventures Unlimited Publishing and can be had from Amazon and elsewhere. I'm told the the film has been updated and contains extras.

Odds are if you pick it up you'll get several viewings out of it.
Posted by Steve Kopian at February 23, 2012