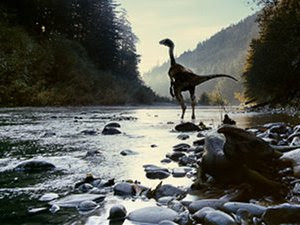 Terrence Malick's meditation/tone poem/WTF exercise involving a family, faith, god and the creation of the world. Its a head trip worth trying once.

Nominally the story of family, and one son in particular, who fifty years on is having a crisis of faith and unsure of the meaning of life. Thinking back on his life he ponders the meaning of it all...

...or something. Your guess is as good as mine as to what is going on. I won't direct you by trying to give you my interpretation of whats it's all about. All I'm going to say is that the first hour is an hour long head trip of beautiful image, majestic music and insightful voice over. The second hour is where the plot kind of kicks in and the film begins to wander...though the notion of a plot is kind of subjective since things still are pretty free form.

The stories of the people hating the film are becoming legendary with theaters having to post a no refund policy since usually around twenty minutes in, about the time the dinosaurs show up, people start walking out. I did not walk out, I sat in my living room, in the dark and had a grand old time.

Is it a great film?

Who knows, but it's fun.

Actually this is the sort of film that is so unique, so one of a kind that anyone who loves movies should at least try. I will not say anyone is going to love the film or hate the film, but I will say its a film that will provoke a reaction and get you talking and thinking and feeling, even if it's to change the channel or throw the DVD across the room.

Do yourself a favor and give this film a shot (and give it to at least the dinosaurs).

...but give it a shot on the biggest screen you can find. Trust me this film looks great and the thought of watching it on an I-phone or I-pad makes me blanch.