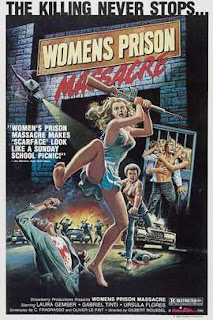 A women in prison film unlike any other, its one with a seeming artistic bend. I mean how else do you explain an opening sequence that is a performance piece that’s being put on by the prisoners? The mind boggles.

The film stars Laura Gesmer as Emanuelle, yes that Emanuelle (or at least the one played by Gesmer in 10 other films), a reporter sent to prison on trumped up charges by a corrupt official. Once inside she finds out just how corrupt things are with guards abusing the inmates on the slightest provocation. With in the inmate population things are run by the blonde Albina, a psycho with bulging eyes and an appetite for destruction. To say that she and Emmanuelle don’t get along is an understatement. Things eventually come to a head when four guys on death row make a break and end up taking hostages (this last twist helps keep things interesting).

What sets this film apart from all the others women in prison films is the weird bend the film has. The prison guards are all in suits which seem to be some sort of cultish uniform. They don’t seem to be practical for watching prisoners. Several characters, guards and prisoners, have fabulously coffered hair. Albina’s hair seems more the sort of thing singer Grace Jones would have worn on stage back in the day. The prison seems to be an odd combination of impractical- say the seemingly unbarred windows mixed with the stereotypical, old style old style steel doors to keep people locked up. Its people and places that never would have anything to do with a real prison, I mean look at the sequences with the people outside the prison, they seem to have been shot in an industrial park instead of abeing outside a jail.

Watching the film I kept thinking what were these people thinking?

Then I remembered when the film was made and it weirdly all made sense, it’s a movie from the early 1980’s when filmmakers tried to reinvent things in a disco synthesizer driven style. There are any number of exploitation films from the period that look similar since producers wanted to seem like they were hip and happening and with “today’s” audiences. In most cases the need to be a reflection of early 80’s culture doomed the films from having any real life because they dated badly (not that the producers cared so long as they made money). Womens Prison Massacre strangely has gone beyond dating into some place timeless. This film is its own unique animal. Sure it hits all of typical, sleazy women in prison cliché’s but at the same time it dress them up to make something different, something that doesn’t really require repeated showers after you see it.

Womens Prison Massacre has been hailed by several women in prison aficionados I know as one of the best of the genre, I begrudgingly have to agree that its certainly one of the more watchable. I don’t know if that means the film is great, but I do know that it kept me awake several nights way past my bed time trying to simply see what happens. (I should say that the repeated viewings were the result of simply being too tired to make it to the end and not a need to see it on several nights running. I’d put the film on when I was getting ready for sleep only to find that I was too tired to go on, but I was some how gripped by what I was seeing that I tried to fight to the end only to fall asleep…at which point I’d wake up a hour or so after the film ended. I then would start it over the next night. It took me three nights but I made it to the end.)

If you are a fan of woman in prison films but you are tired of the same old same old T&A and violence course that most films in the genre take you may want to give this film a shot.
Posted by Steve Kopian at February 15, 2012