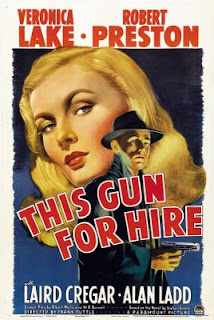 Classic Alan Ladd/Veronica Lake film concerns a hitman hired to retrieve some papers and clear up some loose ends, who ends up double crossed and on the run. While trying to get the man who set him up.

This is one of the first real film noir films though it's not quite as cynical as many of the later films, the woman in question is not evil, rather she is a force for change for good. The anti-hero likes cats, has a weak spot for kids and is willing not to sell out the country. He's a hitman with a heart of gold.

The film was the first pairing of Ladd and Lake. It was a teaming that would last through seven films. There was something about them that worked, part of which was the fact that they were both the perfect height for each other since Lake was smaller than the very short Ladd.(Notice Ladd was not listed as a star it was Lake and Robert Preston)

The film itself is considered one of the best film noirs out there. Its up there in the pantheon of great crime stories in the eyes of many. While I think it is an entertaining film, I would be hard pressed to say it's a great film. Its a solidly good film that survives as a classic thanks to some nice flourishes.

One of the biggest draw backs to the film is Veronica Lake. At best an okay actress, she has always struck me a an actress who needs the perfect role or else she is exposed as being, what she was, a great looking dame with limited range. Sue me, I think she looks great but once she opens her mouth all bets were off.

The plot kind of thrashes around with Ladd's hitman going after Laird Cregar and his boss who are selling poison gas to the Japanese. Its a weird role with weird twists like Ladd's break down in the train yard where all his pain and suffering comes bleeding out. Its a touching moment, but it belongs elsewhere. I know the film is supposed to be based on a Graham Greene Novel but much of this feels like Hollywood additions for the wartime audience (I know the patriotic reasoning of Lake for Ladd to get a confession had to come from a Hollywood hack).

This isn't to say that the film is bad, it's not. It has some great sequences, Ladd Killing his target and having to deal with a little girl, the loopiness of the villain who insisting that his employees practice with gas masks that he knows will be used to bomb our cities and Cregar trying to cover up who he really is when he's recognized when paying off Ladd with hot money, are all wonderful pieces. The film over all pulls you along since you genuinely want to see how it comes out. The problem is that the greatness of the film is lessened by the march of time which makes some of this funny for all the wrong reasons.

I do like this film, I just don't think its a classic.

Worth seeing, this is out on DVD and in rotation on Turner Classics.
Posted by Steve Kopian at February 25, 2012