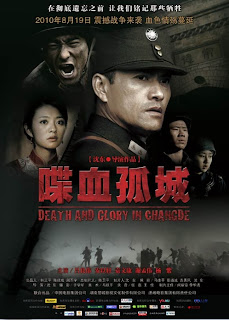 True story of the Chinese Japanese battle for the title city in 1943. It was a forward and back battle that left both sides broken, but the Chinese finally victorious.

Sorry. if you think that's a spoiler, its not, its history.

The film starts with the Japanese on the march and the Chinese dug in. A nurse behind the lines waits for her lover, the head of the Chinese forces, the two sides engage in furious frantic fighting that is so costly that the Japanese are forced to resort to gas and biological attacks to try and win the day.

First off, yes, the film was made by the mainland Chinese government as a rah! rah! propaganda piece. But its not that bad. The film is slanted toward`the Chinese but at the same time it doesn't throw the Japanese under the bus. The Japanese are not your stereotypical baddies, they aren't all gung ho, many just want to go home.

Okay now on to the film.

The film is mostly 90 minutes of battle. The war sequences are interrupted by scenes of the generals planning and the nurse healing the injured. Yes the romance between the lovers is soapy but it's not so soapy as to be distracting. The battles themselves are nicely pulse pounding and exciting. They work because we care about the characters. They also work because they are wonderfully free of computer generated images. Here is a large scale production where its real armies engaging and real bullets (or the movie making equivalent).

I really liked the film. I had put it on as a time killer and found myself truly engaged. I connected to it and the characters on the screen in a way that most of the big Hollywood blockbusters have failed to manage.

On the other downside the film is a bit too focused on the battle scenes and if you don't know the history of the battle you might get a bit lost...

Definitely worth searching out.
Posted by Steve Kopian at February 08, 2012