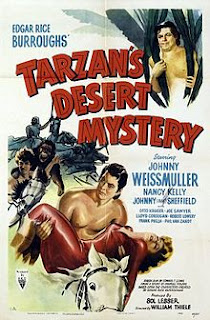 Today and tomorrow we're going to look at two more of the RKO Tarzan films that followed the MGM series. The first thing I have to say in this follow up film to the two Tarzan wartime films I did as a double feature a while back and that is:

Tarzan and Boy head off to pick her up on the boat from England. Along they way they save an Amazon from some big cats. Injured in a fall, Tarzan takes her home and talks his way out of being forced to stay. The meeting with Jane is as expected and after some introductions of new friends Jane, Boy and Tarzan head home. Unfortunately there are ripples from an Amazon bracelet that Cheetah found and Jane's new friends end up with. It sets them on a trip to the Amazon city...or would have had Tarzan agreed to take them. Tarzan refuses because he knows its all about the gold. Boy doesn't realize whats at stake and helps them find the city...and great danger.

Large scale RKO Tarzan film looks in many ways more spectacular than the earlier and much larger budget MGM films. Its just cool that we have so many neat locations like the tree house, the river station and the Amazon city. It looks really great and makes it feel like a solid adventure.

There is a maturity to this film that is missing from many of the other films. What I like about the film is it deals with the effect of Jane's being away and her return after years, there is the maturing of Boy and his need to learn more than Tarzan can teach him and there is the hardening of Tarzan as he watches coldly as some of the bad guys die horribly. It's several levels above what was happening in the MGM films and much better for it.

(And yes I know the picture is the wrong one for this film. If you'll click on the link for the earlier post you'll see I used the poster for this film so turn about is fair play.)
Posted by Steve Kopian at February 09, 2012