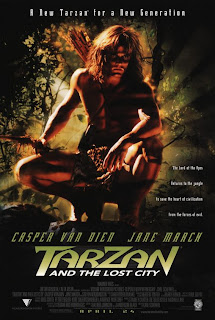 Far far from the best Tarzan film ever made, this is ultimately a good little film that is perfect for curling up on a couch on a rainy Sunday afternoon with a bowl of popcorn and a beverage of choice. When I saw this film in a theater when it came out (I and my brother were some of the very few people to do so) it was on just such a rainy Sunday afternoon.

The film has Tarzan and Jane on the verge of finally getting married. Word comes that an evil treasure hunter is looking for the lost city of Opal and Tarzan must return to save his true homeland.

You know the drill, Tarzan runs off and heads back to the jungle to save the day.

Pure mindless action the film is no better nor worse than many of the other Tarzan films that have been made over the years. What amused me was reading reviews when the film came out saying it sullied the Tarzan name.

I don’t think anyone saying that saw the earlier films or read any of the novels (or saw the TV shows or listened to the radio shows). I mean while it’s a Tarzan film, its still as far removed from the novels as say many of the films that showed up in the late 1960’s…

…then again almost none of the films really were all that faithful to the novels. The only one that I can think of was Greystoke, the Legend of Tarzan or the Edgar Rice Burroughs backed New Adventures of Tarzan serial. All the rest were riffs on the character, with no real internal consistency except for the initial 12 films with Johnny Weissmuller, and perhaps some of the films that followed in close succession after that. (And if you think that Burroughs was worried about the riffing of the character, forget it. He was more than willing to let various producers have their way with him to the point that in the late 20’s and early 30’s you had competing Tarzan projects such as the Buster Crabbe serial at the same time as the MGM films.)

Tarzan as a film character is only loosely related to the one of the novels or the comics or TV or the radio. They are all the same character but filtered through the constraints of each medium and each age. One need only watch the evolution of the character on screen from Elmo Lincoln’s heavyweight jungle man to Johnny Weissmuller classic figure to Christopher Lambert’s noble savage to even Casper Van Dein’s character which in some ways is a throw back to Burroughs’ blending of the savage and the civilized.

I like Tarzan and the Lost City. It’s a low rent Tarzan film that isn’t as bad as many people think. Certainly its better than the 3.8 out of ten at IMDB. It’s the sort of thing that I will stop and watch when it shows up on cable.

It’s worth a lazy rainy Sunday on the couch, which in this case is enough.
Posted by Steve Kopian at February 06, 2012