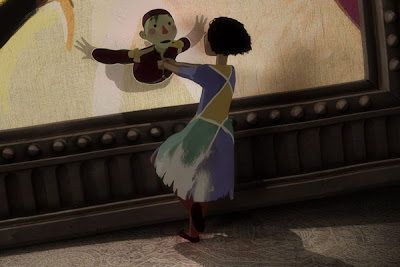 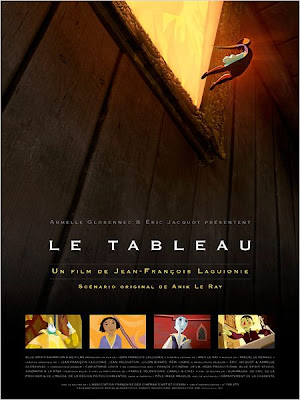 This film is a co-presentation between Lincoln Center's Rendez-vous with French Cinema and The New York International Children's Film Festival and is a real treat.

This is a beautiful animated film about the characters in a painting who have divided themselves into three classes:
The Allduns- who are completely painted.
The Halfies- Who are mostly painted, but not completely
The Sketchies-doodles and drawings from the edges of the painting and are mostly undone.

The Allduns have declared themselves to be the the closest to what the Painter intended simply because they are completely done. They look down upon he other classes, hunting them like animals or using them for slave labor. The Halfies and the Sketchies await the return of the Painter who they hope will finish them and make them equal with the Allduns.

The main plot of the film is a quest that is set in motion when a Halfie and an Alldun's forbidden love is used for a power play. This starts a quest to find the Painter and leads several characters in and out of not only several other paintings but also the real world.

Lovely charming film is sure to make most people smile. Its a real adventure with some heavy overtones (if you want to see them). Its also a film that had many in the screening I attended laughing out loud.

Absolutely great looking the film mixes a variety of visual motifs as the characters shift paintings and worlds. We also get shifts in texture of the characters as they move through the worlds, some time looking more real, and others more like a painting depending upon where they are. Its magical...and probably could not have been achieved had it not been for massive computer assist.

If you are an animation aficionado or if you love art you really must see this film since it will simply blow your mind... It blew mine at times. I'm sitting in a theater full of critics and my jaw was hanging open at what I was seeing. This is real movie magic. I looked around at the people in the theater and they are watching the film, and they are enjoying it but I have no idea if they realize what sort of amazing things the film is doing technically. It looks simple, but the shifts in tone and texture and style is brilliant. It really is. I wanted to stand up and point it out to them, but I thought better of it since it would have been rather rude.

As an adventure and a fable for tolerance the film is excellent. Its a film that shows how ultimately we are all the same...and its just a damn good adventure. Older kids who can read subtitles will really like it. (Though some parents may want to be warned that one of the characters is a topless nude painting.Its not sexy, its just nude. Its like going to a museum)

For me the film has an added bonus of a deeper subtext. The film, if you care to see it is a fantastic discussion of god and religion. The films quest to find the Painter is essentially a quest to find God. The reactions of all of the characters are on some level those of various people in various states of belief (God likes us best, God will come back, I don't know who God is or if he exists but I have to look, God is dead and there is nothing outside of our world). For me the film is wonderful in that it kind of takes the piss out of everyone, since it largely says that no one knows what God's intentions are or how its all suppose to be. (Though a slight spoiler here is that the Painter does show up.)

You don't need the subtext to enjoy it, you just need to see the film and take it on it's own terms to have a wonderful experience. 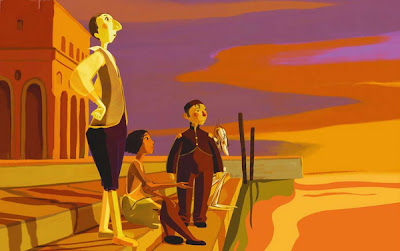