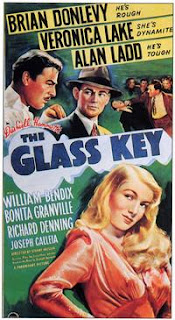 Dashiell Hammet's classic tale is the basis of one of my most favorite films of all time, Miller's Crossing. Until recently I had never seen the best known screen version of the tale.

The plot of The Glass Key has a slightly shady political power broker (Brian Donlevy) getting into trouble when the boyfriend of his young sister (Bonita Granville) ends up dead. He was a no good playboy, just happens to be the brother of the girl he is interested in (Veronica Lake). Further complicating matters is the fact that the dead man’s family is very well to do. Its up to Donlevy’s best friend and right hand man (Alan Ladd) to make it all right and find out who the killer is.

This is a very good version of the story, which while quite good on it’s own terms, kind of comes off as weak when compared to other versions of the story. For my money there was a bit more bite to the George Raft version (at least as far as I can remember) and the Cohen’s rethink, Miller’s Crossing is simply put one of my favorite films. I think that the weakness is that the film doesn’t have the grittiness of the other versions. Although considered one of the early film noirs, for my money it doesn’t fit the mold, certainly not like say yesterdays This Gun for Hire. The film is to bright and airy, other than the scenes involving Donlevy’s rival, we’re in big offices and big houses. Most importantly, there isn’t the aire of cynicism that noirs have, the ending is a happy one.

Don’t get me wrong, I like the film, I just don’t quite hold it up to be the great noir classic that some people feel it is (and keep in mind I’m coming in after seeing several other versions of the story.)

Do see the film. It has a great cast, especially Alan Ladd, Brian Donlevy and William Bendix, as a thug with a love hate relationship with Ladd. I especially like Bonita Granville as the little sister. She’s not some one I normally like, I find her turns as Nancy Drew annoying, but here she was so good I was shocked to realize it was her.

Definitely worth seeing. This is on DVD and in Turner Classics rotation
Posted by Steve Kopian at February 26, 2012