The next Korean Cultural Sevice screening is a Secret Reunion 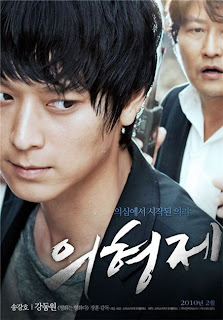 Wednesday is the third Korean Cultural Service screening for 2012. As with Rough Cut this film was screened at the New York Asian Festival. Its a film that proves that when you see a film will determine how you feel about it.

My relationship with this film began at the New York Asian Film Festival in 2010 after seeing one of the best films of the year, Little Pond. During that film I broke a tooth on a red velvet cup cake and spent the time between films trying to get in touch with my dentist...who had left for the Fourth of July weekend...and trying to find something at the nearest Duane Reade to prevent further damage. Pissed off and annoyed I went into the movie and I didn't much care for it. (For those who might care the brief saga of the broken tooth and Secret Reunion can be found here)

As I said circumstance changes everything. I’ve since seen the film on DVD and I now like the film. It’s an often funny, often brutal film about a South Korean government agent who has a sting go horribly wrong (it’s a fantastic set piece). The subject of the sting, a North Korean spy is cut loose by his superiors because it was bad news for them as well. A couple of years later the two down on their luck adversaries meet again, both knowing who the other is but thinking that they haven’t been found out. In a weird twist, they end up living together…where it goes from there and how it goes, both men want to find redemption by getting the other, however things begin to become complicated as they start being genuine friends.

To me the strengths of the film come in the performances of our two heroes and in the set pieces. Kang-ho Song and Dong-won Kang are wonderful. As for the set pieces, what can I say but wow. The shoot out where it all goes wrong still sticks in my head as a great piece of cinematic pyrotechnics.

If there is any flaw in the film, and I think this is the reason that I wasn’t originally warm to the film, it’s that the film is very much a Hollywood blockbuster. Sure it has a Korean sensibility and style in it’s action sequences, but the film is very much like a clone of a Hollywood summer action film. It’s a minor flaw, and shouldn’t stop you from seeing the film.

Worth making the trip to Tribeca, where as always its 630PM doors and 7PM film.
Posted by Steve Kopian at February 10, 2012