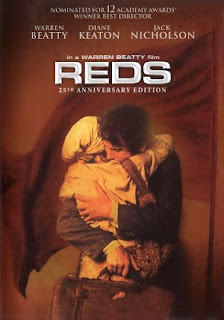 I’m tired of women in prison movies. Yesterday’s film I think pushed this side of the genre are far as it can go. I’m planning on revisiting the genre with the Pam Grier/Roger Corman films somewhere down the line, but for now I thought we’d take a break and go in a completely different direction.

Warren Beatty’s Reds is a much loved, much maligned film. The film came out at the end of 1981 and won a good number of awards (including several Oscars) but in the intervening 30 years has ridden the waves of critical love and hate to the point that it’s kind of forgotten by most people. I’m not sure what the people who do know what the film is think of it now, but I really like it.

The film is the story of John Reed and his wife/lover/ paramour Louise Bryant in the early days of the 20th century and his time writing what is considered by many people the definitive account of the Russian Revolution, The Ten Days that Shook the World. Inter cut with the story of Reed and Bryant are interview segments with the witnesses, people who lived through the events depicted and in some cases knew the people portrayed in the film. While many critics were up and down about the dramatic parts of the film, the segments with the witnesses were universally praised.

A huge sprawling film, Reds covers a large canvas of historical events while never losing sight of the central romance of Reed and Bryant that is the film's heart. Despite running almost three and a half hours this is a film that is at it’s most basic a small scale human story being told with world shaking events in the background. Its never boring nor draggy it’s a film that simply flies by.

In it’s way it’s the bridge of the old school Hollywood epics to the modern sort of blockbuster since it uses the epic framework and uses it to hang the more modern story telling of the romance. The same year that the film came out we also got the failed epic Heaven's Gate which stayed closer to the typical Hollywood epic structure and collapsed under its bloated weight. Where Michael Cimino told his story large scale because he felt it had to be a four hour spectacular, Beatty uses spectacle and length simply because that is how the true events played out and how they have to be told. It maybe a simple love story with politics mixed in, but there is a great deal to tell.

For my money the weakest part of the film is the placement of the intermission which happens at exactly the wrong point and deflates the momentum of the second half…instead of happening at the emotional high point of the revolution it’s comes a short time later by which time any drive into the second half is gone. I remember seeing the film in the theater for the first time and being giddy as what I thought was the first act closer came and went only to find that once the lights went down for the second half I had to fight to get back into the film. I know watching the film on cable I don’t have that problem since I can just keep going, but on DVD I have to switch discs and its kind of a drag.

I think this is a great under appreciated film simply because it refuses to be anything other than what it is. I think the film has unjustly been put on the track toward oblivion (of a sort) because it didn't win the right awards or have stars who are in vogue now (Dianne Keaton and especially Warren Beatty are not big with today's Audiences.) As for the Oscars, the year it came out were an odd year and seem to be almost a mistake in retrospect. The big winners were Chariots of Fire, a film which confounds people looking back and On Golden Pond which gave Henry Fonda an Oscar not so much for the role but for his career. Other films competing for best picture were Atlantic City, Raiders of the Lost Ark. If you ask critics or film historians who should of won you'll get as many answers as people you ask.

For my money Reds should have won Best Picture (although I do have a weak spot for Chariots of Fire). I genuinely believe that the film deserves a rediscovery, it is very much one of the best films of the 1980's and one of the true last gasps of old school Hollywood filmmaking.

If you've never seen the film, please try it. If you have seen it, especially a long time ago, see it again, I think you'll find it's much better than you remember.
Posted by Steve Kopian at February 17, 2012