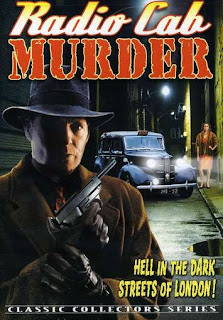 Secret Service Investigator(1947)
Lloyd Bridges plays a war hero looking for a job who finds that he is the spitting image of a dead counterfieter. Hired by the Secret Service to stand in for the dead man he finds that there are complications- the first of which is the Secret Service Agents aren't who the claim to be. Light weight semi-noir film has Bridges as a stalwart hero capable of giving as good as he gets. Graced with a first rate cast this is a fast moving little crime drama that ablly fills out its one hour running time.

Radio Cab Murder (1954)
Solid British crime story about a cabbie who'ssafe cracking past is used by a criminal ring to blackmail him into joining them. He takes the bait, however he's actually working with the police. In a way it's by the numbers but in other ways, in particular on the enjoyment level it's not. Frankly this is a really good, really solid little film that crams more meat than most other longer and allegedly better films. I should point out that while the film has some murder in it, none of it has to do with a radio cab in particular. Currently available from Alpha Video and worth the price of purchase.
Posted by Steve Kopian at February 12, 2012