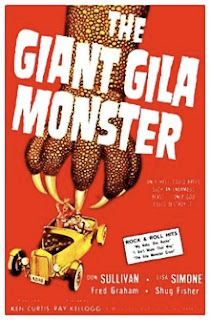 Giant Gila Monster is frequently paired with The Killer Shrews on various drive in double bills and home video releases so I’m going to do a quick write up of the film as the Wednesday matinee film today.

The story of a small Texas town that has to deal with a giant Gila monster is an uneasy mix of teen drama and monster movie. It’s a film that hits all the typical teen is misunderstood by adults while driving around in his hot rod notes. Things get complicated when several of the kids go missing and the sheriff has to turn to the ones still around to help him find out what’s going on.

A good but kind of draggy horror film it’s the sort of film that never manages to mesh the two genres its combining. The teen drama is cliché and unremarkable while the giant monster stuff is well done but never seems to integrate with the rest of the film. The problem with the monster stuff is that the model/live lizard stuff is so beautifully shot that it never works when you cut to the actors and the shoddy special effects that don’t full match the model work. The clash breaks the spell.

To me this is a good… well its an okay but unremarkable little film. I don’t think you shouldn’t see it, rather I think that if you do see it you try to rent or borrow a double feature disc or watch it another movie or two since it’s not the sort of thing to stand on it’s own.
Posted by Steve Kopian at February 01, 2012