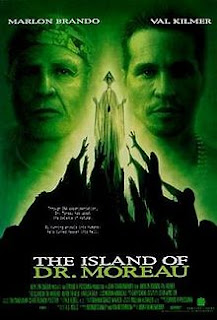 We’re going to end the week with a weird choice for a week of great vacation films by taking a look at the latest version of The Island of Dr Moreau. While the idea of going to an island of man beasts is not the perfect way to spend a vacation, it was how the original director, Richard Stanley spent his time after he was removed from the film.

Stanley and the producers did not get along and when they had him removed Stanley managed to get a job playing one of the many man beasts and he documented what he saw.

I know it’s a tenuous connection for a week of vacation films but sometimes you have to take what you can get.

The film is based on HG Wells classic story about a shipwreck survivor who ends up on an island where a mad scientist is turning animals into people. Its been the source of two other Hollywood productions, the First Island of Lost Souls starred Charles Laughton and was banned for decades in England. Its still a damn creepy movie. The second was made with Moreau title and starred Michael York and Burt Lancaster. It was a rip snorting pot boiler that is a great deal of fun. The film has been the source of numerous other films unofficially including films such as The Twilight People.

This time out the film is huge WTF exercise. I have no idea what they were thinking but the part of me that likes really off the wall strange films loves the film.

First off is Marlon Brando in a house dress. Yes Brando, in one of final roles, wanders through the film in a dress by Omar the Tent Maker. Where Coronel Kurtz in Apocalypse Now may have been a role with his rambling gibberish, here it seems to be closer to reality. Not only do we get Brando being weird we also get a smaller version of him as well in a precursor to Austin Powers Mini-me.

Next we have Val Kilmer looking stoned and pissed off wandering through the film in a performance that is actually amazing. There is something so real and visceral about it that by the time the film ends and Kilmer does his Oscar worthy imitation of Brando you really can feel that he’s ripping the legend as much as he is the character he plays.

Lastly we have Richard Stanley’s script which went through numerous revisions both before and after he was directing. Stanley is a wonderful director with his own ideas and notions, but I know that hiring him provide an updated version of the classic story was probably never going to work with anyone but Stanley directing... especially when he was forced to deal with the insanity of both Brando and the often tough to deal with Val Kilmer. Throwing John Frankenhiemer into the mix may have made the two actors easier to deal with but it was only going to make the story elements go weird since Frankenheimer was never a really good science fiction director.

There is no getting around it the film is a mess…but it’s a mess you can’t take your eyes off of. To me the film remains something that sticks in your head because the insanity of its production matches the insanity of the story. It’s as if the people on screen really are as nuts as to actually try to make people out of animals.

I don’t know if I like the film but I know I can’t get it out of my head.

Trust me it’s a unique film experience that will hang with you much like a piece of toilet paper on your shoe or a nagging cough or a truly weird experience you can’t stop talking about.

See this film and be amazed at the strangeness that can come out of people who should know better… hell you might even like it.
Posted by Steve Kopian at February 03, 2012