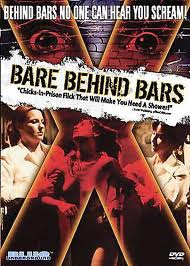 Despite doing a whole week of women in prison films I am not a fan of the genre. It has nothing to do with morals or scruples, rather it simply has to do with most of the films aren't very good. There isn't much you can really do with the basic plot of women in prison; it's either a true life social documentary or pure sleaze, and guess which one most of the films are?

That doesn't mean there haven't been some watchable and even good films, for example most of the Roger Corman produced films like Big Bird Cage are fun exploitation films in their own right (I'll be getting to those films at a later time.) And as you have seen the films this week have been of the sleazy variety, and yet on some level they have remained on some level watchable.even enjoyable if you allow yourself to disconnect from the good social graces and mores.

Bare Behind Bars on the other hand is pure trash. Watchable on some levels but pure trash. In it's way its one of the most violent, certainly the most sexually graphic of all of the films this week. Its also the genre reduced to it's most basic. Its a film that has no pretensions, it just is. It also knows enough not push things into ridiculousness beyond what is inherent to the genre.

It is watchable. As I said its the genre reduced down to it's most basic, something the other film aren't. In a genre that has more films that are so base that you wonder not only who makes these sort of films, but makes you seriously wonder about the audience, this is a film that won't require several showers to clean up after. Its certainly better than the director's Amazon Jail which is pretty unwatchable with it's bad acting, simplistic plot (women are brought to the jungle under false pretext and then sold) and other deficiencies.If you want a film that is in the so bad its bad territory see that film, or don't since you'll only shut it off after five minutes.

Let me put it this way, it's the least of this weeks films and while I have made it all to the end, when doing a second viewing for this piece I did allow it to dissipate into background noise. I would watch any of the other films reviewed first.

Out on uncut and uncensored (ie.hardcore) from Blue Underground and in less graphic other versions from less reliable sources. The choice to watch is your own.
Posted by Steve Kopian at February 16, 2012