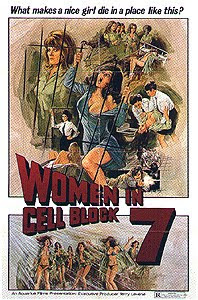 This week at Unseen Films we're going into pure base exploitation and we're going to do a week of women in prison films. These are pure grindhouse fodder that serve no real purpose except to touch the voyeur in all of us. I think we can dispense with any notion of high art here. And don't worry about needing a shower, each film will provide plenty of those.

Women in Cell block 7 is a weird film in that its half an Italian mafia crime drama and half a women in prison film. Its so split that you could actually put this film with ease into a list of Italian crime films with out any trouble. Actually right now we're working out a week of just such crime films and we were unsure whether to put this film here or in the series for about three weeks from now.

The plot of the film has a young woman thrown into prison for drug smuggling after a car crash. It seems that she was arrested after her boyfriend was killed in a car crash. Unbeknownst to her he had ended up with a large package of heroine after double crossing some gangsters from America in a deal that had been watched over by Interpol and other crime families. Everyone wants the drugs, which everyone assumes are now in possession of the dead man's boss. He claims to be innocent, but the other crime familes are going after him. In an effort to save her father the daughter of the marked crime boss, who also happens to be an Interpol agent gets herself put into prison with the dead guys girl.

Confused? I know I was. At least as far as the details.

Actually this is a rather easy to follow double tale of the girls father trying to stay alive/Interpol trying to find out whats going on story mixed with the women in prison tale. The mafia stuff is full of some really good action sequences with some great shoot outs, a good car chase and other tidbits. The prison stuff is pretty much by the numbers with the typical assortment of characters, nudity, sex and stock prison cliches. In a weird way if it wasn't for the showers and intrusive sex scenes (and I do mean intrusive they stop the film dead) this could actually be a typical prison film from Hollywood... though with a very cynical edge.

I like this film. Its certainly not aimed at being anything more than it is, a nice time killer with a bit more than naked women on it's mind. It also helps that the film is split with the story outside which ups the ante and gives a nice counterpoint to everything else.