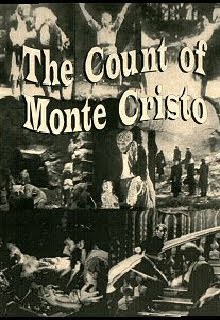 Grapevine Video has put out a DVD of three versions of the classic Dumas tale of betrayal and revenge. One of the versions included is greatly abbreviated version of the Wife of Monte Cristo where the count is injured and his wife goes about getting revenge. Its well produced but its too cut up a version to be included in this survey (It was also made in the 1940’s which means it’s definitely not silent)

The “epic” film runs an hour and vastly reduces events in the film to mostly the romance with bits and pieces of the revenge plot. Actually the film reduces everything down to near incoherence as I had a hard time trying to follow what was going on. Directed in Part by film pioneer Edwin S Porter (The Great Train Robbery) the film is painfully static with a minimum of title cards. Its thrashing around the the mostly painted sets needlessly. Its an interesting misfire that’s dated badly. Honestly it’s the sort of thing I’m glad I saw once but it’s some thing I never need see again.

On the other hand the Grapevine DVD has a truly epic version of the story as well, though also in a wildly reduced version.

Monte Cristo from 1929 is a 40 minute, three reel version of an epic, and I do mean epic French version of the story. The original cut of the film runs around four hours and from the look of it is a wonder to behold. A gritty you are there version of the story I’m guessing that every detail of the source novel is there. There are real ships and real seaports, and huge sets and Arabian settings and a cast of thousands. It’s a mind blowing cinematic achievement the likes of which you rarely ever see.

The only problem with this version of the film is that its only 40 minutes. After the first fifteen minutes the film lurches through the rest of the story with a speed that is frightening- so much so that I had to replay sections in order to understand where things had shifted to. It mostly works, but its clear that stuff is missing.

I loved what’s here, so much so that I’m seriously considering splurging and getting the restored version from Amazon France just so I can see the whole epic…unfortunately I think all of the titles are in French which would make the details a little hard to grasp…

This is the treasure of the DVD and a reason to see if you can borrow the disc from someone.
Posted by Steve Kopian at February 04, 2012