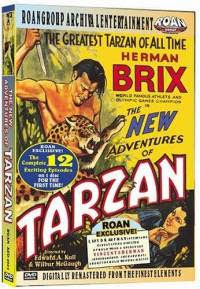 If you ever wanted to know what the real Tarzan ala Edgar Rice Burroughs would look like this is it. This film/serial/film and serial was produced by Edgar Rice Burroughs himself which is both a good thing and a bad thing...if nothing else it proves very clearly that sometimes the author doesn't know best, and that changing a character is the only way to make a character survive in another medium.

Tarzan this time out is played by Herman Brix whom you may know better as Bruce Bennett. Brix was a muscular actor of handsome stature and great ability. He knocked around in B pictures and serials before changing his name and getting even bigger stardom. Brix is not a muscled bound guy, just a well built but kind of average looking guy in great shape. He's not cut like an athlete rather he looks like a guy who might work in a mechanical shop or fix cars...basically a guy who got his muscles from working rather than working out.

The plot of the film has Tarzan heading into the jungle to help find the Green Goddess a valuable jewel encrusted statue that is worshiped in a hidden city in Guatemala. Tarzan is also looking for a friend who is believeed to have crashed in a plane near the lost city. Over the course of “12 chapters” Tarzan gets into a variety of perils which he over comes with his natural ability.

How you see this film will determine what happens. It had a variety of differing releases. First it was a twelve chapter serial, with all the chapters roughly 20 minutes. Next it was released as serial where the first chapter was 65 minutes long. Lastly the film was cut into two different feature films (one called The New Adventures of Tarzan and the other called Tarzan and the Green Goddess), each covering the material in one half of the serial. Each reiteration has material unique to itself. The most difficult to see I think is the 65 minute first chapter version. The only version I know out there was put out by Video Yesteryear on VHS. I’ve never found it on DVD (Though to be honest I never really looked that hard since I’m not a huge fan of the serial)

While a good serial at its heart, the dangers faced are very real and not as fantastical as many serial cliffhangers. The serial can be long winded and kind of static. This is the result of the script needing to drag things out needlessly to fill 12 chapters. This could have and should have been a two hour film not an almost five hour serial. Things get worse in the shorter feature versions which are clearly missing material.

Due to the independent nature of the financing and shooting in the jungles where the film takes place, the film has many technical problems. The film stock and sound are not always as good as they should have been. If you are willing to go with it and accept it all as a matter of the perils of recording life as it happens then you'll have a good time.

For me the problem with the serial is that outside of Herman Brix, who is dashing as Tarzan, the rest of the cast, is wildly uneven. I’m guessing that they were limited by who they could get to make the trip into the jungles (actually they would have been better off just making a movie about the making of the movie since it’s a better story).

I’m sorry if I’m seeming ambivalent about the serial, but its interest lies in the Tarzan character and not in the story.

This is as close to Edgar Rice Burroughs' idea of the character as we are ever likely to see after all Burroughs produced the serial. As portrayed by Brix this a is a different than the Tarzan of the movies then most people are used to. Here Tarzan is intelligent and speaks in full sentences. But he is still a man of action. I know that some people have complained that how Tarzan gets out of things isn't always spectacular (he expands his chest to help get ropes off of himself), but its probably closer to reality then most serials (or even movies) would dare.

Ultimately this is the real Tarzan of the books in the movies, which is why I'm including it in this week of Tarzan films.

Worth a look to how Tarzan of the pages really should look on screen.
Posted by Steve Kopian at February 07, 2012